The annual pilgrimage to the Epsom Derby by a number of our vehicles recently allowed some workshop space to be used to set out the new timber top rail for the near-side of 1828. The top rail is the point where the body side ends and the curve of the roof begins, hence top rail (top of the body side). Running the full length of the vehicle and therefore coming in at almost 30 feet in length, the rail has to be spliced together from a number of different pieces. Ash is used due to its flexibility, durability, cost and weight. Needles to say, it's not cheap! Here we see the wood set out in one of the bus bays. 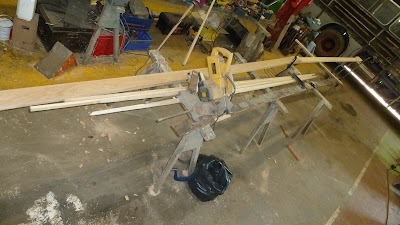 The timber has been carefully measured and is here being cut to length. Next comes the complicated part: setting out the curve of the body shape to exactly fit the vehicle. This has proved extremely time consuming as almost 50% of the original rail is missing, having rotted away after years of abandonment. Imagine too, the tops of the body pillars have to fit precisely in to this rail, as do the hoops which hold up the roof. The next picture was taken to show the extent of the curve built in to this massive piece of wood. Don't forget, the other side will have to be attended to later. 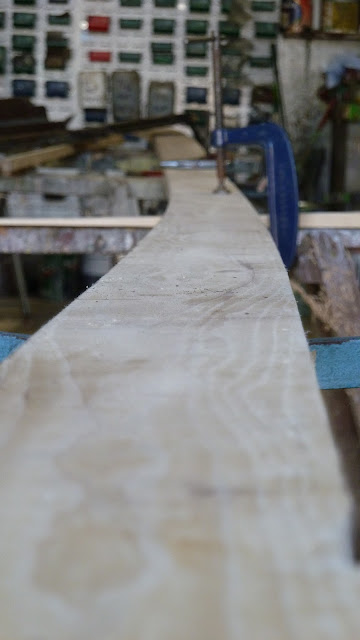 www.facebook.com/SouthcoastMotorServices
Posted by AGE at 04:26