The removal of the existing floor continues. However, as with just about any job tackled when restoring an old bus, nothing is simple. It soon became apparent, that the steel sections fitted down the middle aisle to which each seat leg is attached were in poor condition. A decision was taken quickly to replace these critical fittings, So, off to our local steel fabrication people and 24 hours later we had the new parts.

The floor is spilt up into bay sections. Here are pictures of the first bay around the front wheel arches. The near-side (left hand) arch has been fitted, whilst the off side is still waiting to go in. In the middle of the first picture, the yellow piece of steel is one of the newly fabricated seat rails referred to above. 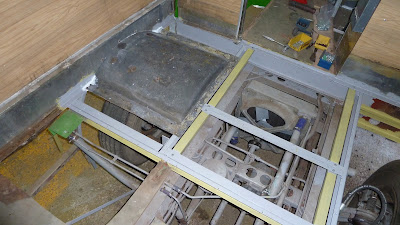 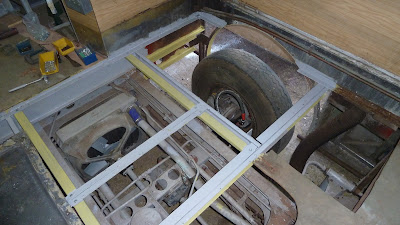 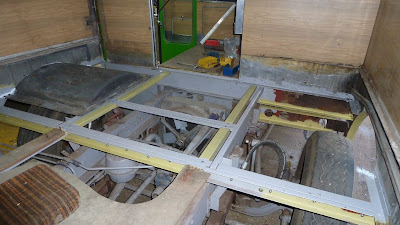 Once the other wheel arch and new ply floor was fitted to this area, bay two was started and the news got worse. Besides the expected seat rail issue, it was discovered that one of the 8 foot wide steel cross-members which support the body had a nasty crack; the tell-tale was that a previous owner (probably Southdown) had professionally welded in a repair patch. It's always wise to look closer if someone else has been there first! The opportunity to replace the support only presents itself when the floor is missing and so once more a phone call produced a replacement steel part. Here, (picture taken standing on the new bay 1 floor), the old section is still in place (left to right in the middle) before removal. 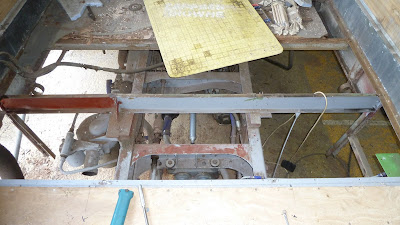 A close up of the patch covering the crack. 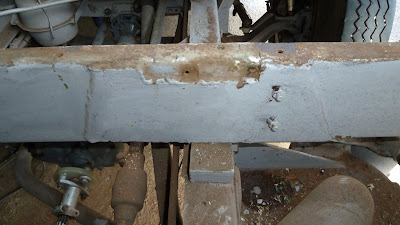 Two close-up views of the crack. 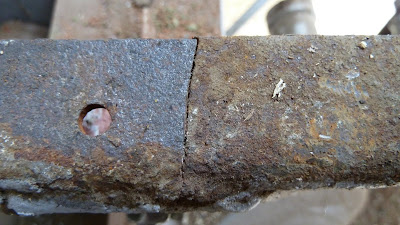 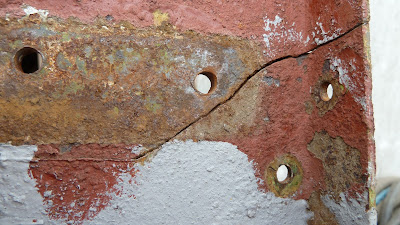 The replacement cross-member next to the old one. 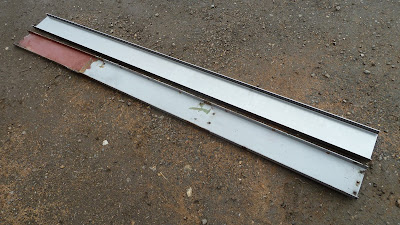 Throughout 2016, one of our gang has been busy dismantling and inspecting each of the vehicle's seat frames, a seemingly never ending but vital task. To complicate matters, the seats are fitted with foot rests and these have been dealt with separately. They are seen here covered with a white(!) rubber grip, which fortunately is removable without damage and will be cleaned for later reuse. 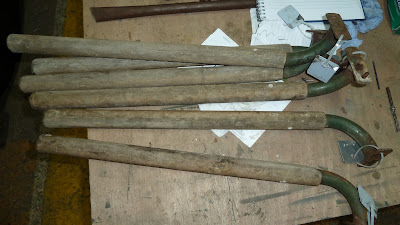 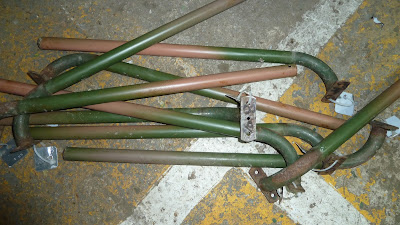 The seat legs are an unusual curved shape. Each has been checked and where damage discovered will be repaired. The remaining have been meticulously rubbed down and primed. Another batch waits treatment here. 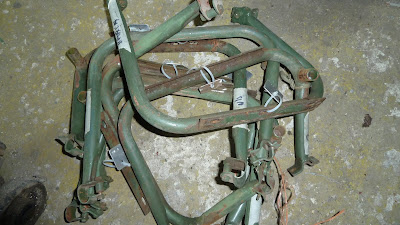 A similar process has taken place with the seat frames themselves, with the added complication that the curvature of each frame requires checking as some are distorted. About 30% require welding repairs and this job will be done over the coming weeks. 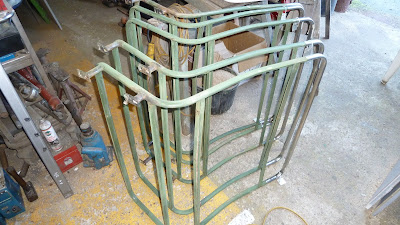 www.southcoastmotorservices.co.uk
Posted by AGE at 10:25

Each bus has a pair of king pins fitted to the front axle and are the 'swivel' which allows the front wheels to change direction. It is fairly rare to need to change the pins: adjustment can be made to remove excessive pin lift by arranging different shims. A certain amount of sideways play is allowed, but can only be completely eliminated by changing the pin and its bronze bushes.

Following the dismantling of the front axle from scrapped vehicle 974CUF, we were able to establish the exact dimensions and type of pin fitted to these vehicles. A recent trawl of the internet revealed four sets of pins for sale and these have been purchased for future use, except that we decided to immediately renew the pins on our 1967 Leyland PD3 HCD350E.

The first job was to remove the hub and brake chambers before the pin could be extracted. The pins usually don't just pop out, (as they did when we changed them on Leyland PSU3 PUF161H), but fight all the way. In this case, we constructed a frame in which sat a 10 tonne jack. The process looks rather 'Heath Robinson', but in actual fact was perfectly safe and very successful! 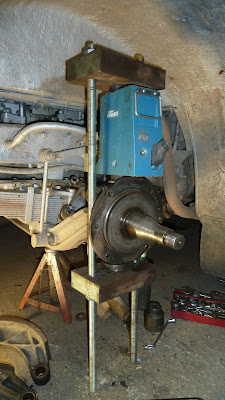 Once the old pin was out, the end of the axle could be cleaned and checked, as could be the stub axle assembly. 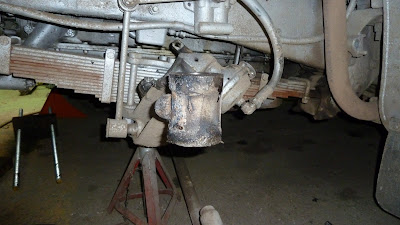 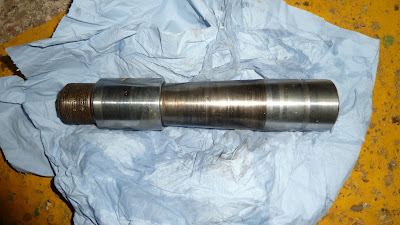 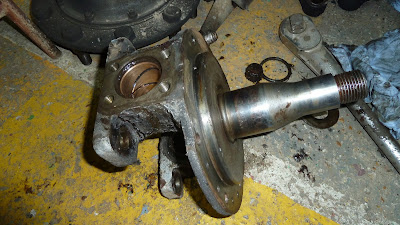 Finally, the bronze bushes were changed and the new pin fitted. The stub axle is seen here reassembled with its new pin. The other side will be changed next. 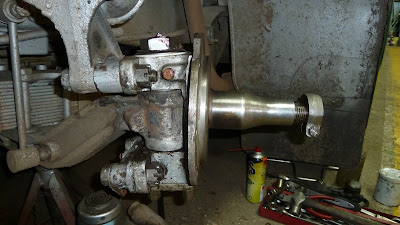 www.southcoastmotorservices.co.uk
Posted by AGE at 16:56

Email ThisBlogThis!Share to TwitterShare to FacebookShare to Pinterest
Labels: Bus number 350, Other vehicles

Like a slow cook casserole, restoration of our Southdown Royal Tiger simmers away in the background. The roof area has been taken to bits and the sliding panels released. These panels, when opened, allow fresh air and sunlight to pour into the vehicle and it becomes the next best thing to 'open top'. The panels are roughly 4 feet square and made with timber framing, which as usual is rotten and has had to be replaced.

The first picture shows one of the old sliding panels; the second picture is the same panel with a new timber frame (made 'in house') laid against it. 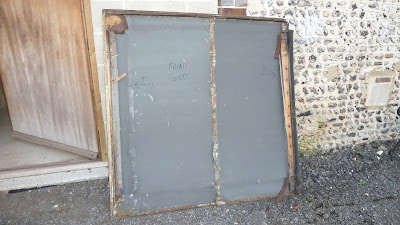 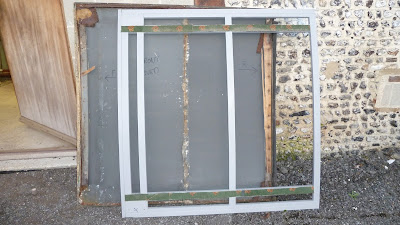 Here is a close-up of one of the new corner joints. 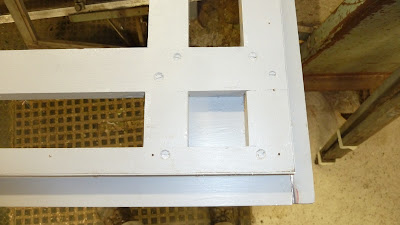 This sideways view shows the extent of the curve to the vehicle's roof. Each part of the new frames (there are two) had to be hand shaped to match. 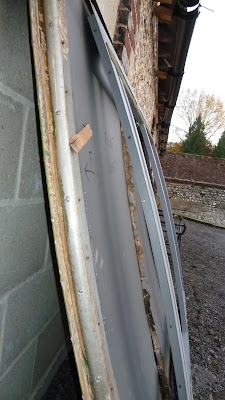 www.southcoastmotorservices.co.uk
Posted by AGE at 10:30