One of the less successful design elements of the Leyland vertical O.600 engines, (which power all our double deck buses), is the adjustable fan belt pulley mechanism which also doubles as the alternator drive shaft unit. The problem stems from the fact the adjuster, which takes up the fan belt slack, is a screwed turnbuckle affair which will happily seize with no encouragement whatsoever. This results in the weakening of the surrounding cast steel housing, leading to cracks or breaks and eventual loss of adjustment to the fan belts, with inevitable risk of the engine overheating and the alternator not charging the batteries.

These units are less common than they once were and we have introduced a rolling programme of reconditioning. The photograph shows one of the pulleys undergoing heating by gas torch. The extreme temperature goes some way to breaking the rust seal within the adjuster joints and makes it less likely the casting will break on disassembly.

After the unit has cooled down, it will be suspended in diesel to penetrate and lubricate the joints. Once in bits, any repairs will be carried out before final reassembly. The unit will then be swapped for another, and so on. 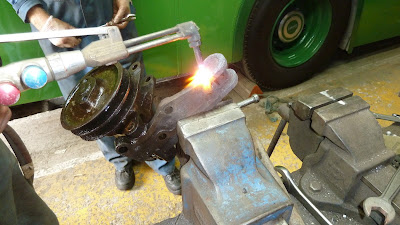 www.southcoastmotorservices.co.uk
Posted by AGE at 22:50

Here are a couple of views of the new seats, freshly arrived from our trimmer, in the process of being fitted to the reconditioned seat frames in Leopard coach 1722. Green moquette to the original 1961 pattern is finished with brown leather panels and cream leather piping. Not only do they look fantastic, they smell rather wonderful too! 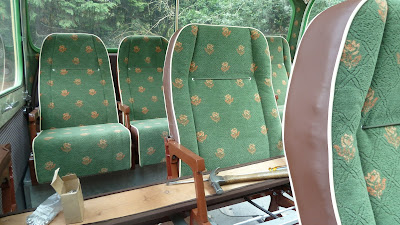 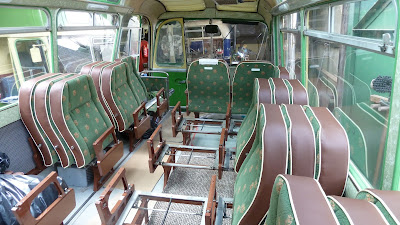 www.southcoastmotorservices.co.uk
Posted by AGE at 22:12