Since the last update in September, work has continued on the full restoration of Dual Purpose Leopard number 461. Firstly, the rebuild of the lower front of the bus has mostly been completed; the lighting and polished trim will be added once the vehicle has been painted. We have also taken delivery of a sign-written "Southdown" which illuminates when lit from the rear. The sign is seen in a trial fitting and has since been placed in store. 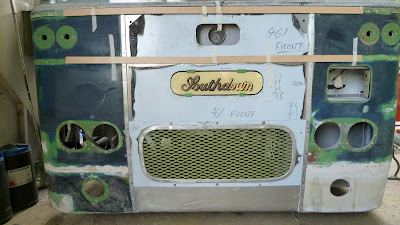 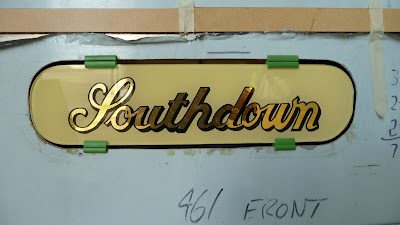 Following the rebuilding of the passenger entrance steps last year, attention turned to the passenger doors. These are massive, standing nearly 8 feet tall with a single piece of glass in each. Fortunately, they were found to be in reasonable condition except for the bottom panels which were replaced. The first picture shows the underside of the door-motor mounting plate above the main entrance undergoing repair. The second picture shows the the doors, which have been painted in full Southdown apple green, (a much easier task when laid on the bench), fitted to the bus. Final adjustment and testing has produced a pleasing end result. 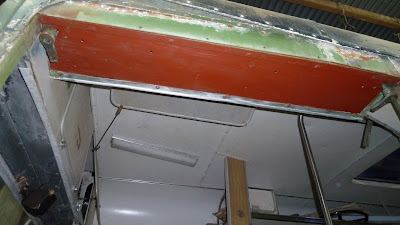 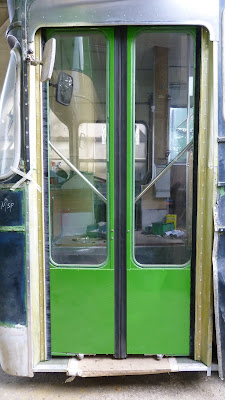 Attention has also turned to the cab area, a time sink of any project. Electrical, air and water systems all lurk below the covers and have to be checked and repaired long before the paint brush can come out. The next two photographs give the reader a clue as to the condition of the foot-well, the rest of the cab being in similar condition. The third picture depicts the partition wall behind the driver, rubbed down and ready for a primer-undercoat. 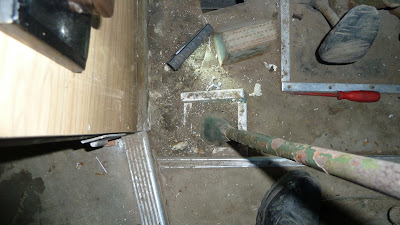 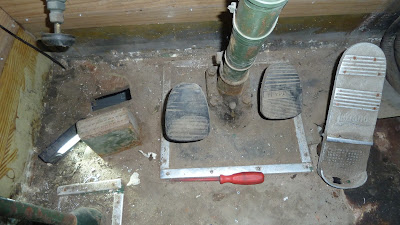 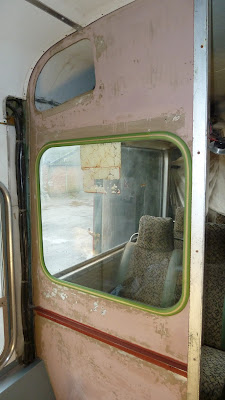 The foot-well transformed! The old floor was stripped out and repaired, throttle and brake pedal systems refurbished, electrical circuits for the 'Setright' ticket machine and cab door 'Pay As You Enter' illuminated sign reconnected, new green 'Treadmaster' floor covering fitted, steering column and gear stick repainted and aluminium trim removed, polished and replaced. The other half of the cab floor and handbrake mechanism is still to do. The hole is where the driver's seat is usually fixed: the raise/lower mechanism sits below floor level. 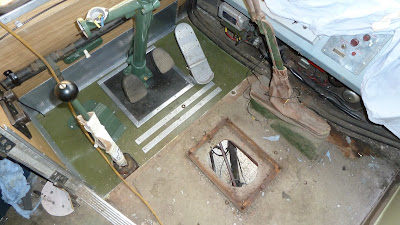 And the partition behind the driver has received its final top coat. Fixtures and fittings are yet to be applied. 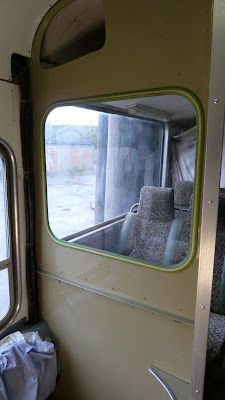 The cab light didn't work but after sourcing spare parts and some TLC it once again shines bright! 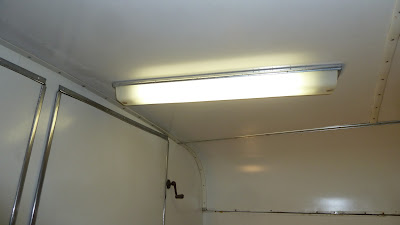 Other small details add to the charm of this vehicle. 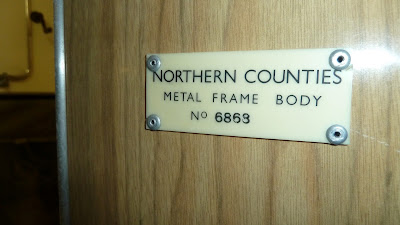 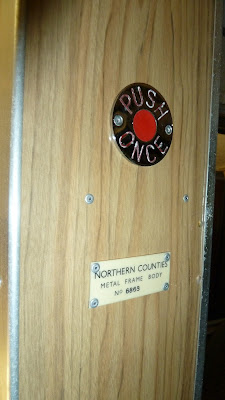 The cab seat is supposed to adjust up or down and swivel to allow the driver to face the passenger. Needless to say, the mechanisms seized years ago and the whole unit has been stripped completely. These pictures show the various parts stripped of paint and prised apart. Painting and reconstruction will follow in due course. 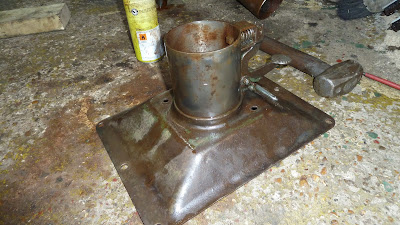 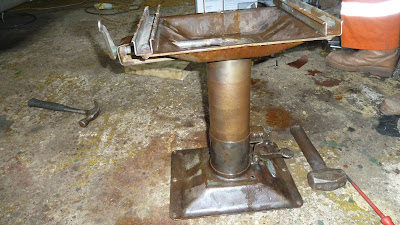 There is still much to do before 461 runs again. Some idea of the challenges ahead need no imagination when viewing the condition of the lower body pillars! 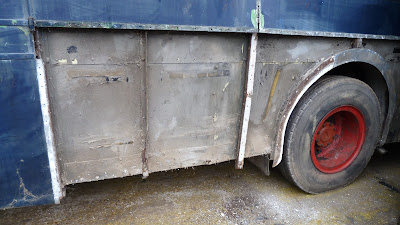 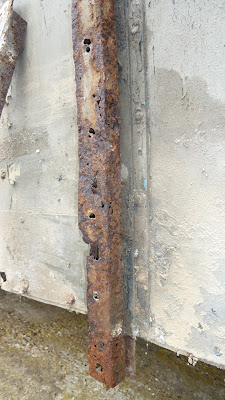 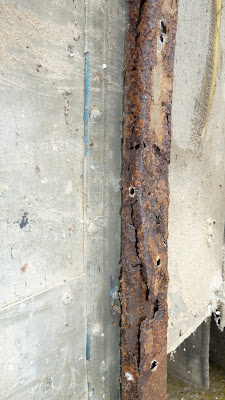 www.southcoastmotorservices.co.uk
Posted by AGE at 21:58

A new year and some unseasonably mild weather has seen considerable progress with the re-flooring of 1722, our 1961 Leyland Leopard L2, Harrington Cavalier. All of the front-end repairs and alterations to the floor were completed around the festive period. The first picture shows this area, (compare to the last three photographs in the 1722 December report). In the second and third view stands one of the rolls of linoleum already cut to size. It's worth mentioning that cutting the lino is a tricky job, as the floor needs to have as few joins as possible and requires the main roll to be laid out on a dry, clean, flat surface so that it can be cut to the right lengths. Further, it has to be a warm day or the linoleum becomes brittle and susceptible to cracking during handling, so we've been very lucky with the mild winter weather!

The first trial lay of linoleum can be seen down the right hand side of the floor. This piece is covering the refurbished coving; the left hand run being still exposed. The coving supports the lino as it curves up against the side walls of the coach, where it then meets the brown seat rail. The hole in the middle of the floor is for the replacement engine and gearbox inspection hatches to be fitted. 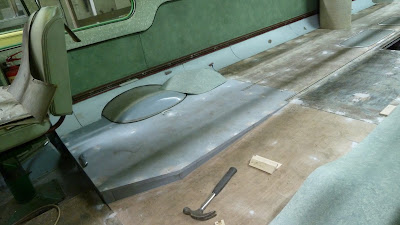 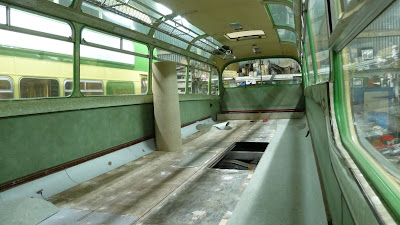 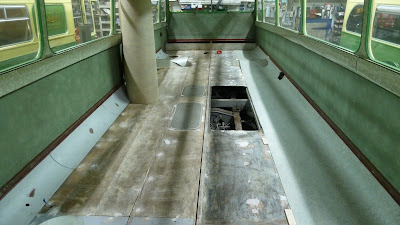 The next selection of photographs show the linoleum laid and ready to be sealed and trimmed. The parallel lines in the first picture are the original seat fixing rails which are offset from the centre due to the 2+1 seating arrangement. 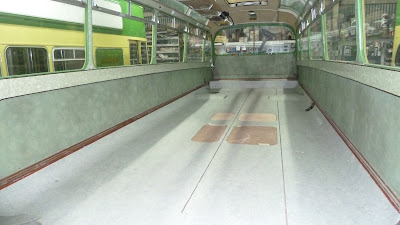 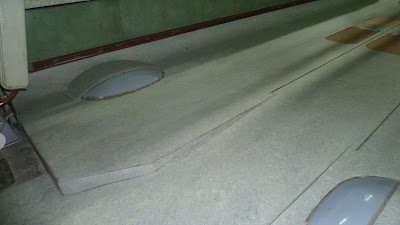 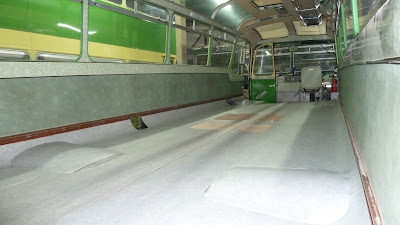 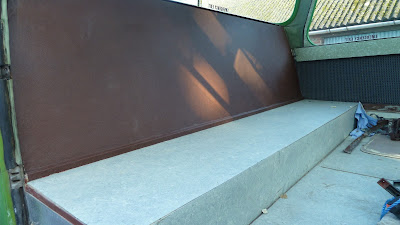 When the coach was new in 1961, the side walls were covered in an unusual moquette made by Holdsworth. Indeed, odd scraps have been discovered hidden behind fittings, presumably left behind when Southdown removed the material during re-seating in 1971, replacing it at that time with a plain green rexine. Around 20 years ago, we took the opportunity to purchase enough moquette to recreate an authentic 'brand new' look and the time has finally arrived to get it out of store and fit it to the coach. Talk about long term planning! The first two views show the freshly applied material glued to the emergency exit door. The other views show the moquette applied to the side walls - and yes, each is one continuous piece! 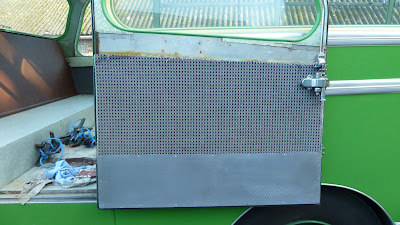 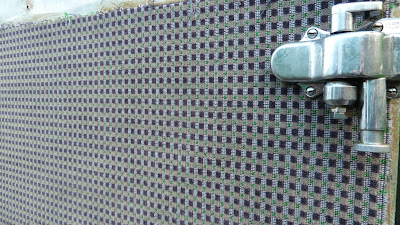 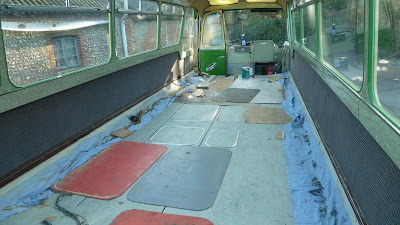 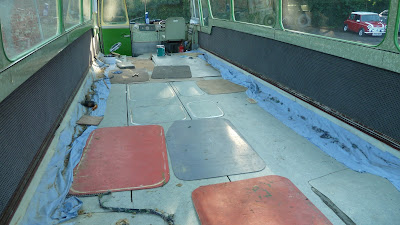 The new engine and gearbox inspection hatches are also taking shape. These have been remade to the original 1961 size, as the 1971 re-seat required a different arrangement. The polished aluminium trim around each hatch has been hand shaped in our own workshops. 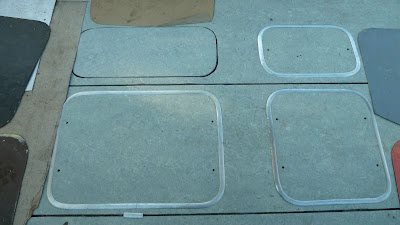 Next steps include relocating the luggage rack back to its 1961 position and assembling the new seats. Finally, the fuel pump mentioned in the last report has been successfully serviced and refitted. The coach is once again able to move under its own steam!

www.southcoastmotorservices.co.uk
Posted by AGE at 22:59