Southdown was rightly famous for its extended “Coach Cruises”, and it is perhaps inevitable that vehicles built to the company’s touring specification have shared most of the limelight and are well represented in preservation, even though they formed a relatively small part of Southdown's coaching fleet. For example, all four coaches in the Southcoast Motor Services collection were originally touring coaches, and although all were downgraded and upseated for general work later in their service lives, we are restoring them to their original luxurious specification.

A much rarer bird visited our depot recently, in the form of XUF 141, a Southdown Leyland Tiger Cub with Weymann “Fanfare” body, built in 1960 (fleet number 1141). This vehicle is believed to be the sole survivor of a batch of no less than 155 coaches built between 1955 and 1962 on Tiger Cub chassis, with bodies by Beadle (130) and Weymann (25).

Designed for “Beacon” Tours, Day Excursions, private hires and general coaching work, these coaches were a familiar sight throughout Southdown's home territory, and further afield. 1141 has been authentically restored externally and internally, and features the “Cirrus” pattern of seat covering, which was also used on contemporary batches of Leyland PD3 “Queen Mary” double deckers. 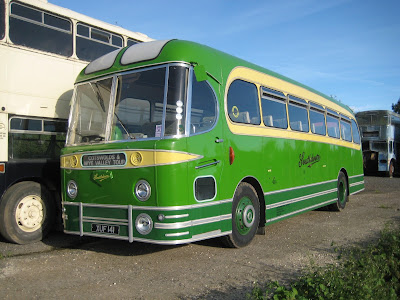 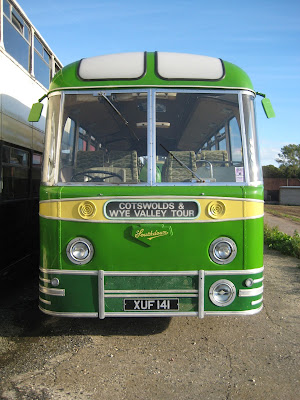 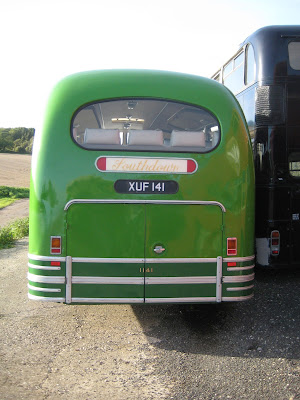 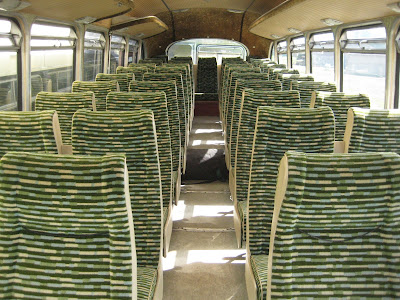 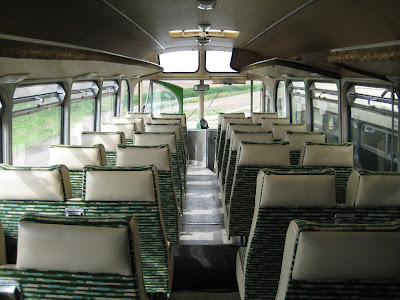 www.southcoastmotorservices.co.uk
Posted by AGE at 14:24

Bus 954CUF took part in a reenactment of Southdown service 20 between Brighton and Sheffield Park Station (Bluebell Railway), on Sunday 1st November 2015. A regular, free of charge service operated throughout the day, starting from Brighton Pool Valley at approximately 10:00 and calling at Lewes Prison 18 minutes later. The last return journey from Sheffield Park ran at around 17:50. 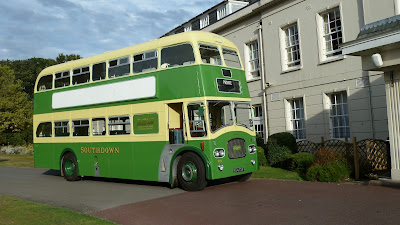 www.southcoastmotorservices.co.uk
Posted by AGE at 16:07

When we purchased car 1722 in February 1990, it was still fitted with 41 'high capacity' coach seats installed by Southdown during 1971. These had replaced the original 2+1 aside Chapman reclining seats which previously gave an overall passenger seating capacity of 28. When the vehicle entered the Southcoast Motor Services operational fleet in 2002, we reduced the seating to 37 by removing one row and repositioning the seats to the original pitch.

It has always been an ambition of ours to restore the vehicle back to the original seat layout, and much experience was gained following the restoration of car 1749 (also with 2+1 aside seats). On return from 1722's last private hire of the season on Saturday the 26th of September, work started to mark out the flooring alterations required. As well as new seating, the luggage rack will require repositioning and a new floor covering fitted. Various other alterations will also be required. As the project progresses, regular updates will appear. 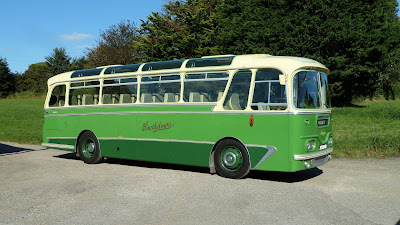 These seats are to be removed and placed in store for use in another vehicle. 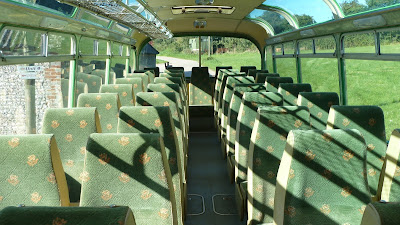 The luggage rack will require repositioning to its original fixings. 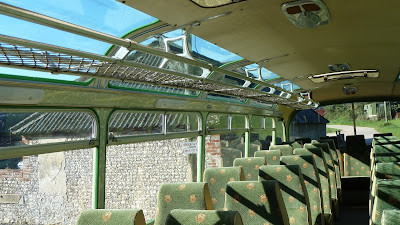 The markings on the floor. 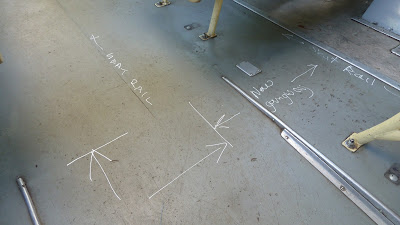 www.southcoastmotorservices.co.uk
Posted by AGE at 10:06

Our convertible open top double deck bus, number 406, has had its 'bonnet' recovered. The bonnet in this instance being the engine access cover which is inside the driver's compartment. Measuring roughly 3 square feet, and covered in brown linoleum, it allows access to the engine by lifting on a massive piano style hinge. The old covering was becoming slightly tatty, so the cover was disconnected and lifted out of the cab to be worked on. Here it is seen being stripped down. 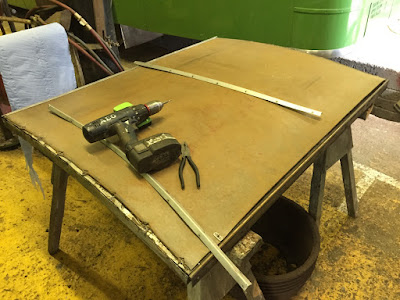 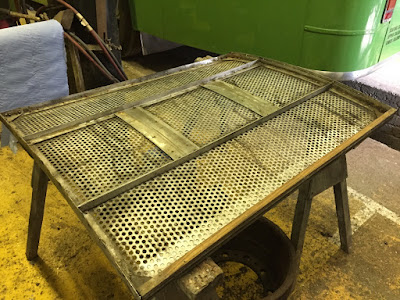 Minor repairs were carried out and a new aluminium sheet fitted, on to which the linoleum is glued. 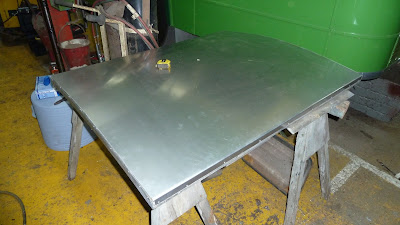 Finally the new linoleum and polished aluminium strip were also fitted. The finished job seen back in the bus. 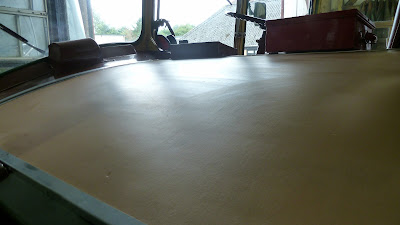 www.southcoastmotorservices.co.uk
Posted by AGE at 09:32