Dual purpose single deck number 465 (PUF165H) was delivered new in 1969 to Southdown Motor Services, Sussex. The chassis is a Leyland Leopard PSU3 with bodywork by Northern Counties of Wigan and is a sister vehicle to our bus 461. The owner of number 465 kindly brought the vehicle into our workshop so that we could compare specifications with our bus 461 prior to its restoration. 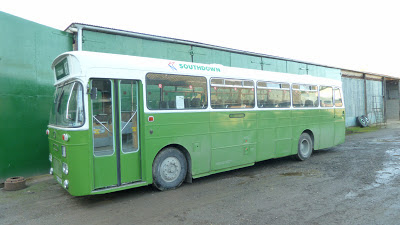 www.southcoastmotorservices.co.uk
Posted by AGE at 22:40

As part of the standard preventative maintenance regime, identifying potential faults before they develop, we are currently working on 350's engine and ancillaries. The first job was quite a large one: to change part of the clutch housing in which the starter motor locates. A crack in the aluminium casting had been spotted towards the end of the running season and so we have taken the opportunity to make repairs over winter.

This picture is taken from inside the bus. It shows the gearbox has been lowered into the pit below. The back of the engine is visible in the top of the picture; the clutch has been removed, exposing the back of the crank shaft (circular with six threaded studs protruding). The clutch housing is split horizontally in two halves. It can be seen that the lower half is cleaner: this is the new part which has just been bolted up. 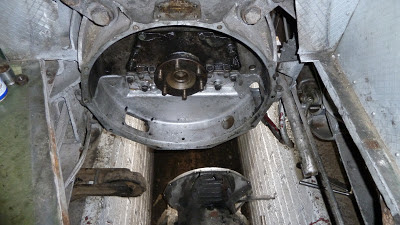 The picture below shows the part which was removed. To the left is the damaged hole in which the starter motor locates. 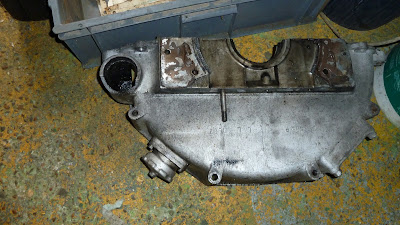 Just to make things difficult, not only does the gearbox and clutch have to be removed to access the clutch housing, the engine sump also has to be taken down. This view is taken from the front of the engine without sump, looking back. Some of the crank shaft can be seen at the top of the picture, the road springs either side and the front axle is at the bottom. 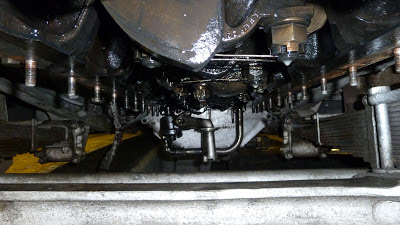 This next view is taken further towards the back of the engine, this time showing the new part of the clutch housing in place. As before, part of the crank shaft can be seen in the top of the picture. 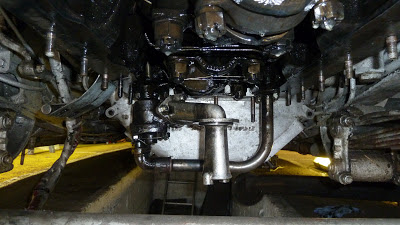 The lower sump casing, cleaned and with new gasket fitted, ready to be lifted into place and secured. 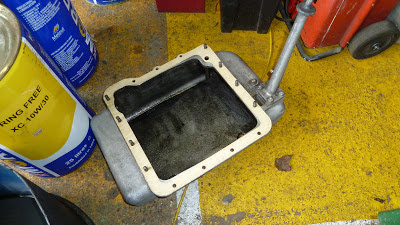 The opportunity was also taken to fit a replacement water pump and new drive belts. The  pump is seen before and after fitting. 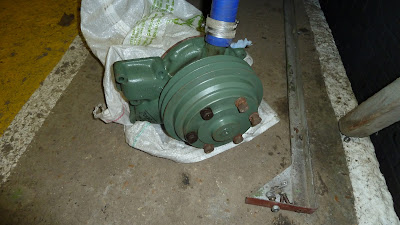 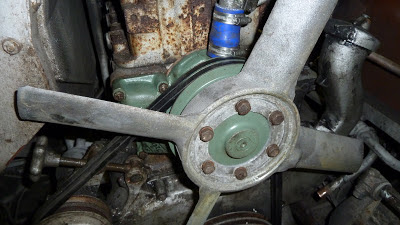 www.southcoastmotorservices.co.uk
Posted by AGE at 10:26

This is the engine compartment of bus 406 looking in from the front with the radiator removed; the water pump is in the top right corner. In the middle of the picture is the drive shaft to the alternator and below that is where the bottom radiator hose would connect to the engine. To the right of these is the bracket on which sits the adjustable pulley unit for the alternator drive. Driven by fan belts, the adjuster takes up any slack. 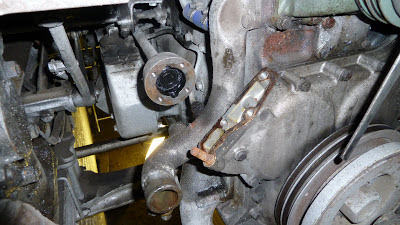 Made from cast steel, the pulley recently developed a crack meaning belt adjustment could be lost. We hold many spares and a new unit was soon fitted. The old pulley is seen below. 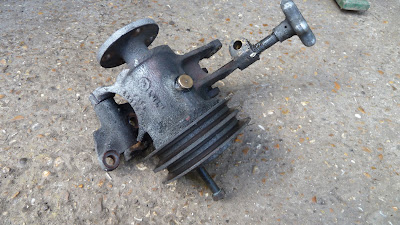 A close-up of the cracked casting. 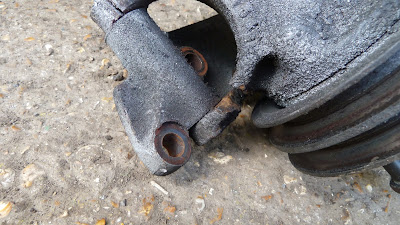 www.southcoastmotorservices.co.uk
Posted by AGE at 23:40

Recently acquired is 972CUF. New in 1964 to Southdown Motor Services of Sussex, this bus was one of a batch of 25 similar 69 seat vehicles from that year, our 954CUF also being from the same batch.

It is planned that 972 will undergo restoration to original 1964 specification as funds and workshop space allow. One of the first jobs will be to refurbish the engine which is currently emitting smoke in all the wrong places! 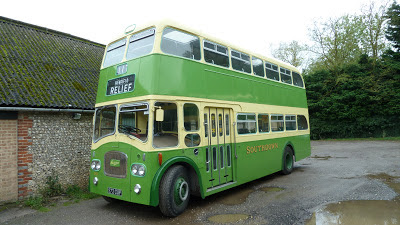 www.southcoastmotorservices.co.uk
Posted by AGE at 00:51

We are very grateful to another generous supporter who has recently sponsored and arranged for a reproduction marquetry inner-roof (ceiling) panel to be made. These panels were a standard feature in Harrington-bodied coaches built in the 1940's and 50's, most vehicles being fitted with two panels - one on the sliding portion of the sun roof, and one on the fixed portion. However the body on 1828 was constructed to Southdown's own specification and features two sliding roof sections (one of which is electrically operated) with a single marquetry panel attached to the fixed portion between them. The original was removed many years ago and we are extremely lucky another is available to copy. 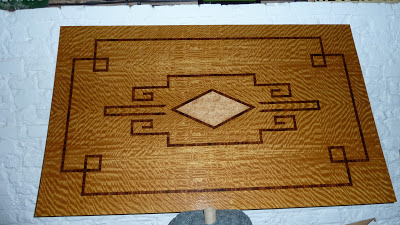 On this panel, the boldly-patterned background is veneered in Nigerian Figured Movingui (also known as Ayan), the geometrical motif is Rosewood, and the diamond-shaped centre panel is made from Birds Eye Maple, so named due to the small conical depressions in the outer annual rings which when sawn appear as dots like a bird's eye. The panel was delivered straight from the makers and has since been sealed and varnished. It has been placed in store until it can eventually be fitted in the vehicle.

www.southcoastmotorservices.co.uk
Posted by AGE at 11:14